“The Requirement” by Wendell Berry 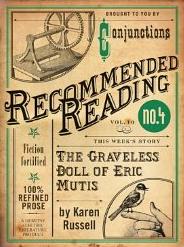 “The Graveless Doll of Eric Mutis” by Karen Russell

This piece, entitled “Something to Remember Me By,” was written by Saul Bellow near the end of his life, and first published in his Collected Short Stories in 2001, only four years before his death. We are reading it as it is reprinted in Electric Literature’s “Recommended Reading” section (which I highly recommend in turn.) The story is recommended by Mary Gaitskill, whose voice should still be ringing in your ears.

Gaitskill’s side note is illuminating, and well worth your time. She interprets this story as the continuation of a conflict that permeates much of the author’s work as a whole: the tension between seeing and knowing, and the challenge of reconciling that tension through the act of living. For Bellow that act often takes as its setting the rough-and-tumble reality of early 20th century Chicago, a city that, in this story and in others, is the stunningly visceral and mystifyingly opaque representation of the modern industrialized world.

One angle of approach to this story that I would like to explore in our discussion next week concerns the nature of that world, and the narrator’s function, both real and imaginary, within it. Those terms, real and imaginary, are problematic in the context of the story; however, I think they open up a seam in this piece that could help us get a grip on what Bellow is up to. Keep in mind, the narrator is a writer, chronicling for his reader (his son) the adventures of one day in the life of his younger self, whom he pointedly describes in turn as a reader, an interpreter, a searcher for signs in the banal and chaotic wasteland of mechanized modernity that is Depression-era Chicago, 1933. A few questions, then, to guide us as we attempt to find meaning in the confusion of this work: Why was it written? What is its purpose? What is its power?

This is, as Gaitskill points out, a coming of age story, and a relatively conventional one at that, at least at first glance. However, I would argue that part of Bellow’s genius lies in the subtle distortions he introduces into our ability to recognize and distinguish ordinary and extraordinary events and objects. Like all coming of age stories, “Something to Remember Me By” is dominated by sex and death. But what to make of a jar of strong mustard stationed near to a girl’s corpse? How can we assimilate the overwhelming corporeal reality of sex, when it is showcased and manipulated with total indifference in a doctor’s office? What makes this story a bildungsroman unique to Bellow is the way quotidian objects blend into and transform these most profound of human secrets, forming a new, hidden order of knowledge which young Louie is drawn to wrestle with and decode. But how? And why? These are questions that echo back at our narrator as he attempts to sift through his experience years after the fact, for reasons that are perhaps unclear even to him. Such questions resonate with us, too.

These are just a few things that jumped out to me, and that I’d like to touch on next week. I hope you enjoy this story by one of (North) America’s greatest writers. See you next Tuesday.

“Something to Remember Me By” by Saul Bellow

The short story I have chosen for the March edition of the English Reading Circle, Mary Gaitskill’s “Something Better Than This,” is not an easy story. Its colloquial, conversational language has surely kept you close to the dictionary – or to the computer screen. In any case, I hope your linguistic frustrations have not kept you from enjoying the first story Gaitskill published. I must confess that I selected this piece mainly on the criterion of my own literary tastes (I find her writing highly intriguing), and because its re-publication in Fictionaut gives us the opportunity to reflect on another proposal of many literary magazines: in order to bring non-circulating or unpublished work by known authors to a wider readership, they publish or re-publish these texts. Thus Gaitskill’s regular readers are no doubt delighted to come across “Something Better Than This”, but it can also serve as an excellent introduction to her work, or even as an isolated story to discuss – as is our case.

Gaitskill’s work, as I’m sure you must have gathered after reading the text, is immensely psychological. Both the characters and the narrator are unusually perceptive, or at least trying to be, lending a certain depth to a generally uncomplicated structure. Her stories are also darker, more purgatorial than most. The themes addressed are quite common, as surely everyone can identify with some feeling or reaction in the story, but the aesthetic and the situations unique to Gaitskill’s writing can be disturbing. For instance, the film “Secretary” is based on one of her short stories, and explores the intricacies of both love and sadomasochism.

So, that said, what is disturbing to us about “Something Better Than This”? I’d like this to be the question you really think about in preparation for our meeting of the Reading Circle – if I may be so bold as to outright ask for such a thing. I think we can begin to formulate an answer by looking at the scene of the story as Gaitskill sets it. These initial words are not simply colloquial, hence the confusion they probably produced as you read the story, but conjure up a whole atmosphere of negative connotations. Even before the reader is introduced to Susan, Yonge Street in Toronto seems like a dreadful place to be on Saturday morning. The reader could very easily replace the “she” with “I”: “Surely she was made for something better than this! At least something better than clobbering down to this humming, clicking neon nuthouse of a street.” Susan, who is the story in a sense, is equally as incapable of capturing the reader’s sympathy. Her contempt of most everything and everyone is clearly the opposite of charming: immediately upon appearing on Yonge street, she (and/or the narrative voice?) refers to a group of teenagers as “those pimple-mouthed forms of low-life clinging around Mr. Submarine like fungus.” These hyphenated bursts of anger can be found throughout the story. Most of the information the reader receives about Susan can best be taken from her observations, and since the story is mainly that, let’s not leave all the responsibility on our participant in charge of reporting to the group on characters.

What keeps the reader engaged, then? Why do we continue to read, despite the unpleasant setting and embittered central character? I have a double suspicion. For me, at least, the power of the language Gaitskill commands is a major incentive to read on. The other element, as least in Susan’s case, is the promise of redemption. “Something better than this! Susan has been waiting for something better than this for years now. She hasn’t a clue as to what this better destiny might be, although she can picture herself writing caustic bestsellers, or hosting talk shows, or something, you know. But this will have to happen later because now she has this stuff to sell.” Susan is not redeemed in the end. Or is she? What about the reader? How do you feel after reading “Something Better Than This”? How are we supposed to feel?

I look forward to you hearing your thoughts at our meeting on Tuesday. I hope you’ve enjoyed this month’s story – or at least found it stimulating.

“Something Better Than This” by Mary Gaitskill. 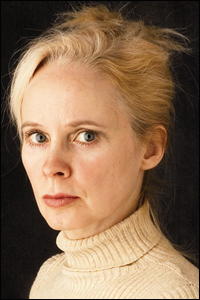 The reading that I have selected for the month of February, “You Remember the Planes,” is rather different from the ones we have seen in past sessions – different in that it is not a “short story” in the traditional sense. And yet it certainly has something that resembles a narrative. Some of those traditional literary critics (who adhere to the ‘traditional sense’ I mention above) would undoubtedly consume pages upon pages in an attempt to classify and define it according to certain ‘genres’ whose nuanced definitions are constantly under revision anyway. What seems to be clear in our case is that the author of this piece, Paul Auster, has produced a short literary-essay-memoir for the literary magazine Granta and its readers, but whatever name we give to this particular type of writing is ultimately not very important. The answer to this question of genre is not what I think we should be looking for here. Rather, I think it would be an interesting idea to look at it as if mirrored in what it is not: a piece of short fiction, similar to those we have discussed in recent months. What do we see?

As you read, I encourage you to reflect on the following points:

I look forward to seeing you all on Tuesday and hearing your thoughts. Till then, happy reading.